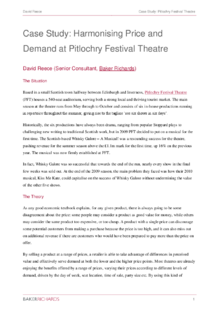 An article addressing how to harmonise price and demand at Pitlochry Festival Theatre. By increasing the prices for a consistently sold out, fast selling section of the auditorium for its first time musical, the organisation was able to take advantage of the stronger demand for certain nights and certain seats to maximise their revenue and still offer a range of prices to suit the range of demand.

In 2009 Pitlochry Festival Theatre decided to put on a musical for the first time. The Scottish-based Whisky Galore – A Musical! was a resounding success for the theatre, pushing revenue for the summer season above the £1.1m mark for the first time, up 16% on the previous year.

Whisky Galore was so successful that towards the end of the run, nearly every show in the final few weeks was sold out. At the end of the 2009 season, the main problem they faced was how their 2010 musical, Kiss Me Kate, could capitalise on the success of Whisky Galore without undermining the value of the other five shows.