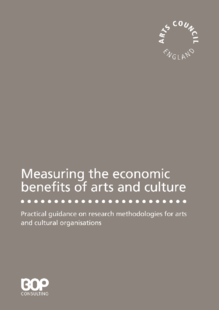 This practical guide takes a look at why arts and cultural organisations might want to measure economic benefit and gives a decision tree to follow to decide on the best method to adopt. Each of the four methods suggested is then discussed in detail, together with case studies of organisations that have used it. It finishes with links to toolkits and further reading to help organisations understand the subject and practice.

The second method, economic footprint analysis, focuses on measuring the size of an organisation’s activities, and comparing it with the national economy as a whole. Although this method has considerable overlaps with the EIA approach, it is only rarely used in the cultural sector, at least for assessing the contribution of a single organisation – it is more commonly used to look at the contribution of an industry or sector. The Department for Culture, Media and Sport (DCMS) uses this approach to measure the size of the creative industries.

Bolton decided to carry out a contingent valuation study after hearing from the British Library’s Lynne Bradley about their contingent valuation study – in particular, that it was seen as helping the British Library make their case for their economic value with the Treasury. The methodology Bolton used was adapted from the British Library report. Bolton hoped to raise the profile of their service with key decision-makers, and also saw the study as a way of complying with national strategies of the time such as the Museums, Libraries and Archives (MLA) Council’s Framework for the Future and Renaissance in the Regions.