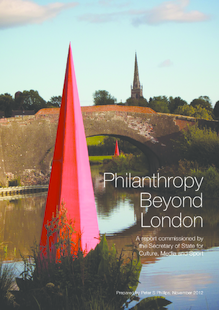 This report examines ways in which higher levels of philanthropy and increased fundraising capacity for the culture and heritage sector in England may be encouraged. It focuses on skills and training, fundraising leadership, partnering with other organisations, membership and friends schemes, payroll giving by organisation members, and celebrating people who give. It looks in particular beyond London and into the regions, reflecting the fact that organisations based in London benefit from 70% of all philanthropy generated in England.

From the many interviews conducted and background research undertaken there was found to be a broad consensus on the areas in which action needs to be taken in order to increase public awareness of the case for private giving to cultural sector organisations, to encourage a much wider acceptance of philanthropic giving as being central to the values of our society and ensuring that philanthropy is recognised and celebrated, and to increase fundraising skills. Arts Council England is in fact progressively introducing schemes under its Catalyst programme, championed by its chair Dame Liz Forgan and its chief executive Alan Davey, aimed at supporting fundraising development and this is referred to in more detail later in this report. Whilst larger organisations may be further along the road in incorporating the essence of the organisation-related recommendations listed, they are nevertheless addressed to all.

In making recommendations it is stressed that whilst some may be achievable in a shorter time frame than others, and a tremendous amount could be achieved in a five to ten year time span, there are no “quick fixes”, and the underlying challenge is to bring about significant advancements in the culture of giving over a generation.