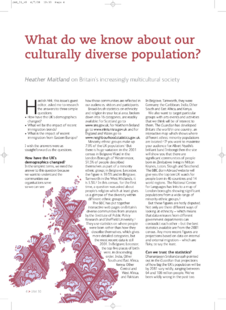 Can we trust the statistics?
Dhananjayan Sriskandarajah pointed out in the Guardian that projections of how big the UK’s population will be by 2081 vary wildly, ranging between 64 and 108 million people. We’ve been wildly wrong in the past too. In 1965, the forerunner of the Office of National Statistics (ONS) predicted that by 2000 the UK would have a population of 75 million.