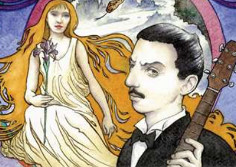 For four weeks in April-May 2013, a new and fairly unknown company - Little Bulb - performed their show Orpheus at the Battersea Arts Centre’s Grand Hall. Orpheus is an unusual concept bringing together the Greek myth about Orpheus and the story of the legendary Jazz musician Django Reinhardt. In this case study, Katie Elston from the Battersea Arts Centre, describes the marketing campaign behind this production.

The look and feel of all the marketing was tied into the 1920s era. We always try to be playful with our marketing. Social networks were key for the first and second weeks. On the first night we ran a Twitter event (people who won tickets on Twitter were invited for drinks before the show and encouraged to Tweet). At the beginning of the second week we ran a dressing up night with a 1920s glamour theme, free Bellini’s and an old fashioned photographer taking pictures.

We reached out to Jazz and music networks through distribution and researching, and building relationships with new venues and contacts.