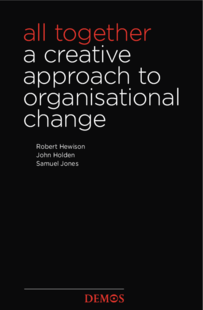 
A case study of organisational change at the Royal Shakespeare Company, guided by their ensemble principles:

The report is detailed about how change was managed. Demos explores three areas that other organisations might learn from the RSC model; leadership, networks and creativity and change.

Organisational change is not easy. According to Linda Holbeche: ‘Various reports suggest that 75 per cent of all transformation efforts fail.’ Leaders have to hold in balance on the one hand an organisation’s creativity and desire to change, and on the other its continuity, established culture and traditions.The experience of the RSC shows some ways in which this can be done.

The RSC’s story shows that it is not the titles and conventions of leadership that matter, but what leaders do and how they do it. Much of the rhetoric around leadership concentrates on the individual – ‘the right person at the top’ – but research shows that companies, in the creative sector at least, may have a single individual as the public face, but have strong teams acting as collective leaders.