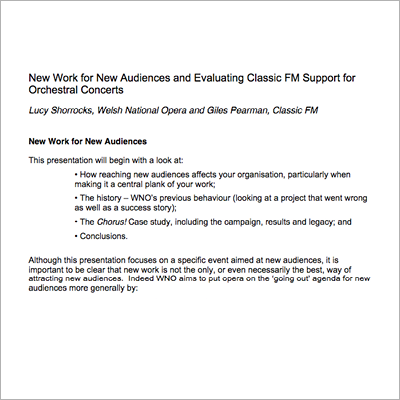 New work for new audiences: an approach to audience development

Explore Welsh National Opera's approaches to reaching new audiences and delve into the evaluation of Classic FM-supported concerts in this presentation by Lucy Shorrocks and Giles Pearman.

This presentation will begin with a look at:

Although this presentation focuses on a specific event aimed at new audiences, it is important to be clear that new work is not the only, or even necessarily the best, way of attracting new audiences. Indeed WNO aims to put opera on the 'going out' agenda for new audiences more generally by:

First of all, the story of WNO's Carmen. The Education Director was keen on the idea of a one hour, one act Carmen which would have the passion and the punch to attract new audiences. Tickets were £10 and it was a big undertaking, utilising the full WNO resources (orchestra, chorus and principals). Performances were staged at 1.30pm and 6.30pm (the latter to reach the commuter audience) and it was aimed at people new to opera. However, there were a number of issues with the project:

As a result Chorus! was approached in a very different way. 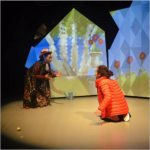