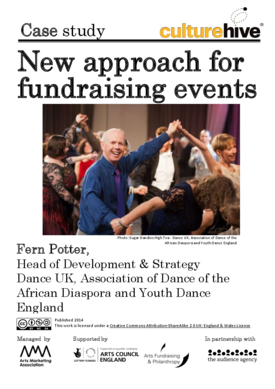 In this case study, Fern Potter, Head of Development and Strategy for Dance UK, Association of Dance of the African Diaspora and Youth Dance England describes the challenges of mounting a fundraising event to raise funds for the three organisation whilst developing their capacity to fundraise in general. The major, joint-fundraiser event Sugar Dandies High Tea took place in April 2014 at the Royal Ballet School in Covent Garden. It was the first time Fern had produced a fundraising event for three organisations at the same time and it raised just over £40,500 which exceeded the original fundraising target.

It is also vital to set out a detailed strategy with clear aims and objectives and not be too ambitious if it’s a first time fundraiser. Sometimes it is enough to just aim to widen one’s profile to a whole new group of potential donors as it is to raise funds. Both are important steps in building development potential for an organisation. And just as significant is the need to build in time for proper follow up. Follow up is often neglected but is the best way to nurture over the long term, the relationships created by an event.