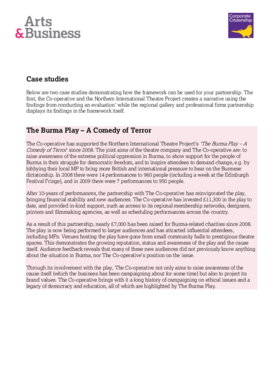 Measuring the value of business support

Arts & Business has developed a framework to measure the benefits of arts-business partnerships. Two case studies demonstrate how the framework measures inputs, outputs and community and business impacts.

As a result of this partnership, nearly £7,000 has been raised for Burma-related charities since 2008. The play is now being performed to larger audiences and has attracted influential attendees, including MPs. Venues hosting the play have gone from small community halls to prestigious theatre spaces. This demonstrates the growing reputation, status and awareness of the play and the cause itself. Audience feedback reveals that many of these new audiences did not previously know anything about the situation in Burma, nor The Co-operative’s position on the issue.