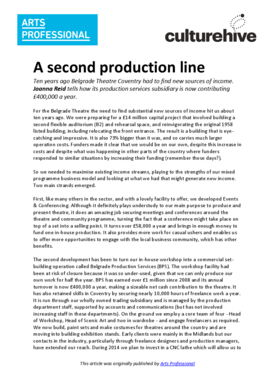 Ten years ago the Belgrade Theatre in Coventry had to find new sources of income.  In this article, Joanna Reid describes how, in addition to promoting its events and conferencing services, the theatre turned its in-house workshop into a commercial set-building operation, which now contributes £400,000 a year as a production services subsidiary.

The second development has been to turn our in-house workshop into a commercial set-building operation called Belgrade Production Services (BPS). The workshop facility had been at risk of closure because it was so under-used, given that we can only produce our own work for half the year. BPS has earned over £1 million since 2008 and its annual turnover is now £400,000 a year, making a sizeable net cash contribution to the theatre. It has also retained skills in Coventry by securing nearly 10,000 hours of freelance work a year. It is run through our wholly owned trading subsidiary and is managed by the production department staff, supported by accounts and communications (but has not involved increasing staff in these departments).