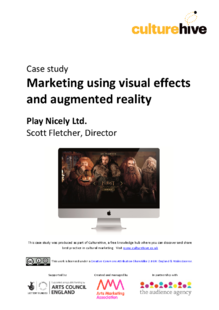 
Discover how a digital agency created a web-based augmented reality app to raise awareness of the film, The Hobbit, and boost ticket sales. Targeting Hobbit franchise fans, Tolkien fans, web and social media users, Play Nicely created an experience which let you become a dwarf from the Hobbit universe, and record and share video with friends.

The 3D face tracking experience allowed users to become one of the thirteen Dwarves from the film as well as change their natural surroundings to a variety of locations from Middle Earth. A bespoke video recorder system gave users the chance to share not only a still photo of the experience, but also a short film with audio.