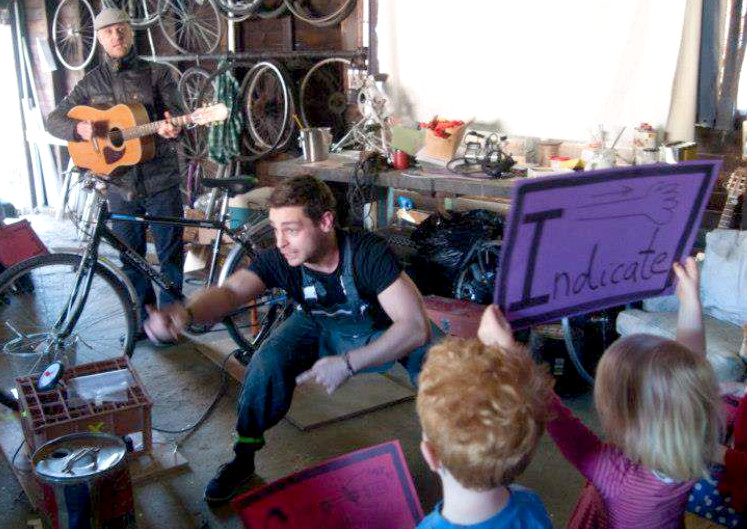 
Oxford Playhouse presents and produces a wide range of live performances including tours of its own shows under the banner of Playhouse Plays Out (PPO), an on-going series of off-site productions and events which happen at surprising and unusual locations across the county. This case study describes how digital, guerilla and viral marketing techniques were used to promote the PPO production of Bicycle Boy. Aimed at 5-to-8-year-olds, Bicycle Boy ran for 12 performances in May 2013 in a specially converted garage just half a mile from Oxford Playhouse.

Process
It was essential that the marketing campaign reflected the strongly eco-friendly ‘message’ of Bicycle Boy. Consequently, we relied more heavily on digital, guerrilla and viral marketing techniques than on our usual direct and outdoor marketing methods (whilst taking care not to overlook the Playhouse’s core family audience).

A title treatment for the production was rolled out 3 months before the show opened. It was specifically designed to be used in a variety of contexts and on a range of media - both in combination with the poster artwork (a graphic of a bicycle) and on its own as a free-standing logo, which is how it appeared on all digital activity for the production. Graphics included at the end of this case study.

A relatively small quantity of print was created. Leaflets were printed on recycled, matt paper in order to reflect the urban and environmentally conscious themes of the production. Approximately 6 weeks in advance, flyers and posters were distributed to family venues across the city, and mailed only to the small number of Playhouse family contacts with no email address, thus reducing paper usage. The covering letter featured photos of the garage venue to help ignite curiosity, particularly among local residents. A telemarketing campaign was also undertaken to primary schools across Oxford to establish whether they would accept leaflets to insert in all children’s bags and all schools contacted agreed.