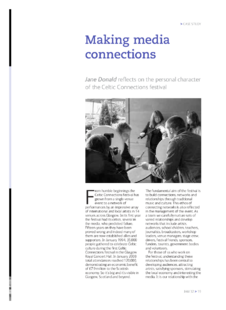 From humble beginnings the Celtic Connections festival has grown from a single-venue event to a network of performances by an impressive array of international and local artists. The fundamental aim of the festival is to build connections, networks and relationships through traditional music and culture. This ethos of connecting networks is also reflected in the management of the event.

It is our relationship with the media that I have been most continuously involved with since joining Glasgow’s concert Halls in 1998. During the first six years of the festival the Glasgow Royal Concert Hall’s own staff developed the press office in-house. Building personal contacts, using word of mouth and ensuring excellent knowledge of the music was a tactic that resulted in friendly local press coverage and formed an important basis for what is now considered a tradition and part of the annual calendar for key members of the Scottish arts media.