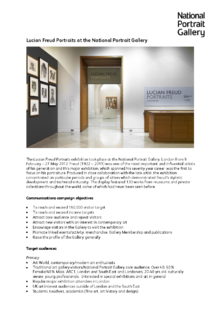 After five years in the making, the National Portrait Gallery's major exhibition of Lucian Freud Portraits took place in 2012. This major exhibition, which spanned Freud's seventy year career, was the first to focus on his portraiture. Produced in close collaboration with the late artist, the exhibition concentrated on particular periods and groups of sitters, and featured 130 works from museums and private collections throughout the world, some of which had never been seen before. This case study describes in detail the marketing campaign behind this major exhibition, which was the most popular paid for exhibition in the Gallery’s history.

A two-week presenter-read campaign ran on Classic FM and 130,000 leaflets were distributed via Gallery mailing lists and displayed in public buildings including galleries, libraries, shops, cafés and cultural venues. A special Lucian Freud Portraits micro site was created and the exhibition was promoted on a regular basis through the Gallery’s e-newsletter, Facebook page and Twitter site. An ‘early-bird’ online offer encouraged visitors to book the relatively quiet first time slot of the day and we ran special offers with the Association of Train Operating Companies and Eurostar to encourage UK audiences from outside London and European visitors.