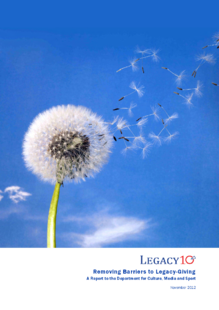 Legacy giving in the UK – stepping up to the challenge

Fundraising occupies a lot of our time in the cultural industries, and sometimes it can seems like it's getting harder and harder to compete with larger, more established charitable organisations and their fundraising teams.  This research report highlights some of the reasons why smaller organisations might not be getting a bigger slice of the pie, and offers practical ideas on how to up your fundraising game by removing barriers to legacy giving.

According to the Civil Society Almanac there are around 160,000 registered charities in the UK. It is well documented that 1% of these organisations (the few hundred charities with an income in excess of £5m), account for around 68% of the estimated £37bn annual total charitable income. Meanwhile, roughly half of all UK charities have an annual income of less than £10,000 per year (accounting for 0.4% of all donations). According to the Charities Aid Foundation data for 2010, this picture is also broadly replicated in the levels of legacy funding across the largest 1000 charities, with the 10 largest legacy recipients accounting for around 40% of all legacy donations and over half of the charities on
the list not recording any legacies at all.

During the course of our research a number of philanthropists made reference to the blunt and ineffective nature of some legacy marketing they had encountered. In their experience, current legacy engagement by some organisations was too ‘clunky’ and lacked imagination; for it to be effective they argued, the strategy needed to go
beyond simply engaging with donors at significant birthdays. This observation appears to be borne out by the CAF figures outlined above, and some organisations which are less proficient at attracting legacy donations may need help refining or establishing their strategy.