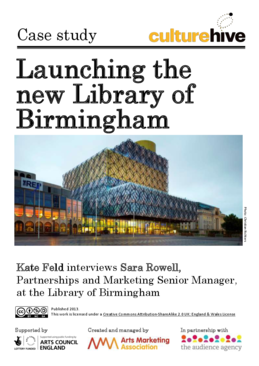 Launching the new Library of Birmingham

It’s not every day that libraries make the front page, but the opening of the new Library of Birmingham was one of the big culture stories of 2013. In this case study, Kate Feld interviews Sara Rowell, Partnerships and Marketing Senior Manager at the Library of Birmingham, about the launch of this spectacular new building and finds out what happens next.

KF: What was the turning point?
SR: A big turning point was when we got capital approval in 2007, and people began to understand that the new library was really going to happen. And the other big turning point was when we revealed the design for the building and people could visualise what it was going to look like in its setting. As with all great architecture, some people love the design and others not, but it excites people and gets people talking. What’s been really interesting is the reaction people have to the library space inside. Just about everybody who comes in for the first time looks up through the stunning rotunda atrium and says “wow.”