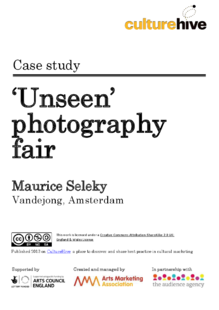 
In 2012 Vandejong, a creative agency based in Amsterdam, created the branding strategy and campaign for the first  ‘Unseen’ international photography fair, which took place at the Culture Park Westergasfabriek in Amsterdam. This case study outlines how Vandejong positioned Unseen – the first fair of its kind in the Netherlands – as a new cultural brand: a ‘photo fair with a festival flair’. To reach out to an international audience, Vandejong developed a multi-channel communications strategy, with a strong focus on content marketing and online campaigning.

Key point for effective practice
Vandejong positioned Unseen as a ‘photo fair with a festival flair’, and devised a cross-media, content-driven communication strategy across a sophisticated mix of owned, earned and paid media. In order to spark an interest in the brand within the target group, the editorial team started creating content five months before the fair, publishing articles, interviews and videos three times a week according to one of three defined themes (‘Young Talent’, ‘New Photography’ and ‘Buying and Collecting’). During the fair itself, reviews and reports were added daily. This extended presentation and reportage on photographers, galleries and collectors during the run up has proven to be both rare in the world of art fairs, as well as an enriching and innovative strategy. Not only did it ensure that Unseen was firmly established as a brand prior to its debut, but also that the established brand would remain engaging independent of the fair.