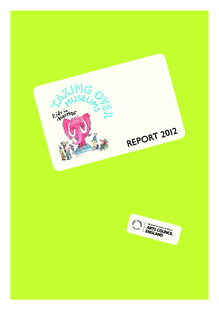 Following the success of the 2011 event, children were again put in charge of museums, galleries and heritage sites across the UK for a whole day in 2012. This report looks at how these cultural institutions attracted young people to take part, and what the participants – both children and museums – got out of it. Featured case studies include Birmingham's ThinkTank science museum, Pitt Rivers Museum in Oxford and the Geffrye Museum in London.

Before Takeover Day, although most children were positive about museums, there were plenty of negative comments, mainly that museums were ‘boring’. After takeover Day, not only had the number of positive comments almost doubled, but the ratio of positive to negative significantly increased from 2:1 to 14:1. the number of children who had anything negative to say about museums was more than halved after taking part and 100% of children had something positive to say.