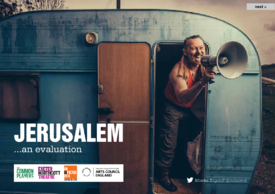 
The Jerusalem Project saw The Common Players Theatre Company, in partnership with Exeter Northcott Theatre and local promoters, bring Jez Butterworth’s award winning play to the West Country on tour. This report explains the audition/casting process, the relationship with promoter partners, the make up of the audience and their reaction to the piece. In addition, it looks at the economic impact the production had, and the social capital generated for audiences and participants.

It seemed a foolish idea. To try and create a high quality 'professional standard' production of an internationally celebrated modern play with a fearsome reputation, significant acting challenges and no assembled team, in the belief that local unpaid talent would rise to the challenge and opportunity for development.