CultureHive > Article > Is getting £5 really much easier than getting £5 million?
4th September 2014 Sara Lock 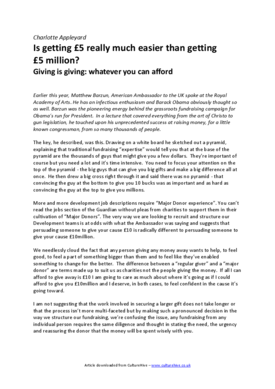 
In this article, Charlotte Appleyard challenges the donor pyramid concept and considers the argument that persuading an individual giver to give your cause £10 is just as important and as hard as convincing a major donor to give you millions. Motivation for giving is the same whatever the amount and this article argues that any level of fundraising requires the same amount of diligence.

Is getting £5 really much easier than getting £5 million? September 4th, 2014Sara Lock

We needlessly cloud the fact that any person giving any money away wants to help, to feel good, to feel a part of something bigger than them and to feel like they’ve enabled something to change for the better. The difference between a “regular giver” and a “major donor” are terms made up to suit us as charities not the people giving the money. If all I can afford to give away is £10 I am going to care as much about where it’s going as if I could afford to give you £10million and I deserve, in both cases, to feel confident in the cause it’s going toward.