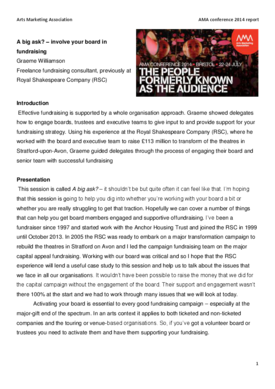 Involving your board in fundraising

This AMA conference 2014 session led by Graeme Williamson, a freelance fundraising consultant who previously worked at the Royal Shakespeare Company (RSC),  discusses how to engage boards, trustees and executive teams to give input to and provide support for your fundraising strategy. Using his experience at the Royal Shakespeare Company (RSC), where he worked with the board and executive team to raise £113 million to transform the RSC theatres in Stratford-upon-Avon, Graeme looks at the process of engaging boards and senior team within your fundraising strategy.

Why involve your Board?
Why involve the board at all? Why not just hire some more good fundraisers to get on with the job and let the board get on with their other responsibilities? I’m going to argue that to really fundraise at that level you absolutely need that engagement and you need them because, ultimately, there are asks that you can’t make as a fundraiser. There are peer-to-peer asks that are only going to happen and are only going to result in the right level of support if you’ve got your board members or other senior fundraising committee members engaged and involved.