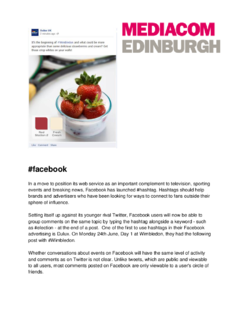 So, Facebook has launched #facebook.  So what?  This short article from MediaCom Edinburgh considers the difference between the Twitter hashtag and the Facebook hashtag.  How will Facebook’s complex privacy settings affect the success of the Facebook hashtag?  Read what one of the UK’s leading media planning and buying agencies has to say about it.

In a move to position its web service as an important complement to television, sporting events and breaking news, Facebook has launched #hashtag. Hashtags should help brands and advertisers who have been looking for ways to connect to fans outside their sphere of influence.

Setting itself up against its younger rival Twitter, Facebook users will now be able to group comments on the same topic by typing the hashtag alongside a keyword - such as #election - at the end of a post. One of the first to use hashtags in their Facebook advertising is Dulux. On Monday 24th June, Day 1 at Wimbledon, they had the following
post with #Wimbledon.