International comparisons on engagement with sport and culture 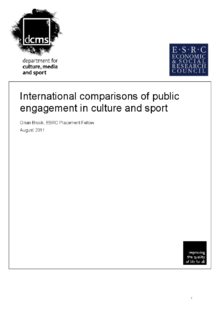 
Ever wondered what the participation figures for sport and culture are like outside Great Britain?  How do we compare with Scandinavia? How does education across Europe affect participation levels?  This report outlines some of the key data gathered across Europe, highlighting where Great Britain does well, and where we might perhaps learn about engagement from our neighbours.

GB is in the second quartile of attendance rates for most cultural activities, having higher than average but not leading rates of attendance.

Of particular interest is the comparison with direct public spending on culture, which needs to be treated with caution, as different definitions are used and different time periods covered (KEA European Affairs, 2006, p123-124). Nevertheless, a pattern seems to emerge: levels of public attendance to culture seem to be related to levels of direct government funding. According to this analysis, the UK is estimated to have 5% higher cultural attendance than the European trend would predict.

How has the public’s relationship with the arts changed over recent years – how do we now consume the arts?