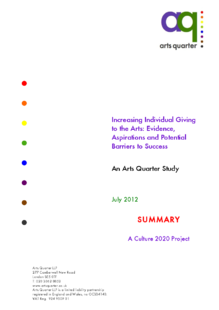 Increasing individual giving to the arts

This report looks brings together findings from two studies conducted by Arts Quarter – the Hidden Wealth Research Project and the Philanthropy in the Arts Survey and brings together findings from these two projects to provide a snapshot on the extent to which arts organisations have some of the most fundamental building blocks in place to embark effectively on the process of soliciting higher levels of giving from individuals. The two projects surveyed a total of almost 500 organisations who shared views and aspirations on a range of areas relevant to the development of their individual giving activities.

This report seeks to highlight the degree of potential for arts organisations to engage effectively in higher levels of individual giving, their aspirations to do so and any identified barriers to success in meeting these aspirations. As mentioned in our introduction, to do this, we are reporting across two key research projects we have undertaken recently;

Topline findings on both of these projects have been previously reported and summaries of findings can be downloaded from the Arts Quarter website.

This report however seeks to drill down further and to provide more detailed insights, exploring potential to engage in securing higher levels of individual giving as well as, organisational aspirations and possible barriers to success based on findings according to art form scale and location so as to highlight opportunities. This allows us where necessary to identify issues from which organisations reading these findings may look to learn and move forward with their own individual giving plans. In generating this report we hope it will be used by arts organisations to reflect on their own position on the issues raised and findings reported and look to develop

Fundraising information at your fingertips