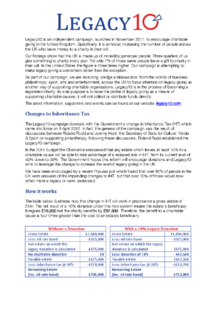 Cultural organisations are increasingly looking at ways to encourage philanthropy. This factsheet outlines Legacy10, an independent campaign that was launched in 2011 to encourage charitable giving. You'll find some key facts in terms of UK giving along with a list of campaign supporters for the Legacy10 campaign. There's also an introduction to changes that were made to inheritance tax in April 2012, and what that means for potential prospects.

The Legacy10 campaign dovetails with the Government’s change in Inheritance Tax (IHT) which came into force on 6 April 2012. In fact, the genesis of the campaign was the result of discussions between Roland Rudd and Jeremy Hunt, the Secretary of State for Culture, Media & Sport on supporting philanthropy; following these discussions, Roland Rudd established the Legacy10 campaign.