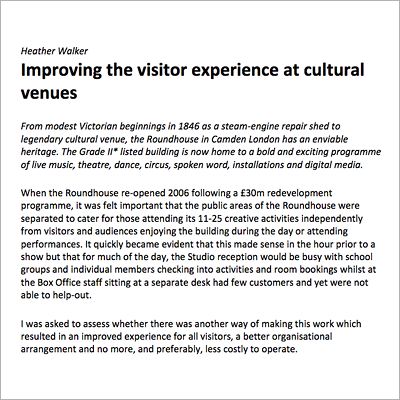 Heather Walker draws on her work as a consultant for the Roundhouse to explore how cultural venues can improve visitor experience through a more unified approach to visitor and customer services.

From modest Victorian beginnings in 1846 as a steam-engine repair shed to legendary cultural venue, the Roundhouse in Camden London has an enviable heritage. The Grade II* listed building is now home to a bold and exciting programme of live music, theatre, dance, circus, spoken word, installations and digital media.

When the Roundhouse re-opened in 2006 following a £30 million redevelopment programme, it was felt important that the public areas of the Roundhouse were separated to cater for those attending its 11-25 creative activities independently from visitors and audiences enjoying the building during the day or attending performances. It quickly became evident that this made sense in the hour prior to a show. However, for much of the day, the Studio reception would be busy with school groups and individual members checking into activities and room bookings while at the Box Office staff sitting at a separate desk had few customers and yet were not able to help out.

I was asked to assess whether there was another way of making this work which resulted in an improved experience for all visitors, a better organisational arrangement and no more, and preferably less costly to operate.

What I discovered was two individual operations, managed by different managers working at adjacent desks in the same foyer staffed by two entirely separate teams. Yet most of the individuals in these teams worked on a casual basis across both operations, effectively totting up the equivalent of full-time hours. And while the individuals had the skills and expertise to work in both areas, what they actually did on each shift was dictated by which desk they were operating.

In my experience, public-facing operations like this develop because they are conceived on the basis of how the organisation is arranged between directors and managers rather than focusing its services on the end-user. Looking at this operation from the outside-in a visitor might wonder why they were gently ushered from one desk to another or indeed why they are waiting in a queue at one when there is little activity at the alternative. Internally this might make sense; externally it looks like bureaucracy and a lack of thought.

Following a detailed review involving the staff working in these areas, the Roundhouse amalgamated the activities and introduced a new Visitor Services structure. One welcoming counter now acts as the reception, information desk, studios booking-in area and Box Office operation. In the hour prior to a performance, the ticketing part of this separates out into a distinct area so that those young people attending drop-in sessions are not caught-up in the crowds collecting tickets for that night's show.