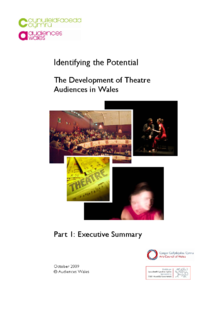 Report on research undertaken on how theatre audiences could be developed in Wales.  The research aimed to identify current trends in drama attendance in Wales, provide profiles of drama attenders and potential attenders, assess the approach to and correlation of programming and marketing, and identify areas of good practice and potential audience development schemes and initiatives.

Audiences Wales received funding from the Arts Council of Wales to undertake a major research project on current and potential audiences for drama in Wales.

The impetus for the project came from the Arts Council of Wales’s drama strategy which expressed the concern that audiences needed to be developed for drama, particularly in light of the new English language National Theatre for Wales. There was also in-depth discussion about current and future audience levels at the Creu Cymru Drama Consortium Meetings, and there were concerns in the sector about the long-standing problems in attracting drama audiences.