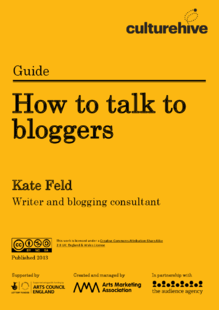 Cultural bloggers are passionate about the arts, promoting their content across extensive social media networks, and engaging with the young and local arts consumers. But how can an arts organisation engage with the blogger? And with so many blogs out there – where do you start? This guide provides seven key tips on the most effective ways to reach out to bloggers and webzine editors to get them engaged with your arts organisation – from the perspective of arts blogger and cultural webzine editor Kate Feld, who runs the Blog North Awards.

1. Know your blogs
Lots of people in the arts complain that their work is ignored by bloggers when they’re actually guilty of ignoring bloggers themselves. If you don’t read blogs or hyperlocal sites and don’t maintain a presence on Twitter (where much of the discussion happens these days) you won’t understand who’s already writing about your organisation or who you want to be writing about your organisation, and the kinds of things they’re interested in. Read their posts. Maintain (and regularly update) a list of relevant blogs/webzines/hyperlocal sites and keep up with their output. Leave comments on well-written posts or share stuff you especially like.

2. Treat them like professionals
Magazines and newspapers may be on the wane, but blogs and webzines are booming. The traditional model of professional critics specialising in one artform is changing into a freefor-all in which volunteer bloggers and contributors to web-based magazines are the new cultural critics. Add bloggers you like and respect to your press list, send them press releases and photos, set up interviews for them and field their queries just as you would any other journalist. They are part of “the press” in the 21st century, and you have nothing to gain from treating them as second class citizens. But expect them to act like professionals in return. A blogger who enjoys press tickets but never posts a review isn’t playing by the rules, so feel free to call them on it.