How to start a conversation with a mass audience 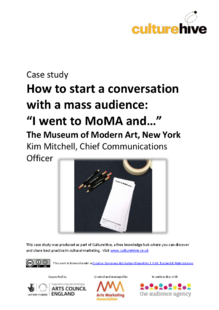 
Starting in April 2011, the Museum of Modern Art in New York asked its visitors to fill in notecards  “I went to MoMA and …” to describe their experiences of the museum. With the simple tools of cards, pencils and tape to stick the cards on to the museum’s lobby wall, the project turned into the museum’s longest-running campaign engaging with tens of thousands of MoMA visitors and appearing in print, digital and billboards. This case study sets out the process and outcomes of the campaign.

How to start a conversation with a mass audience August 30th, 2013Sara Lock

Once the campaign flight ended, we had literally tens of thousands of cards stacked up in our offices. With the help of the New York-based agency POKE, we devised a digital system where visitors could fill out a card, scan it, and see it projected on the lobby wall. The scans were then uploaded to a dynamic website, ultimately creating a 21-century digital version of the museum guest book. Some 32,000 cards from 83 countries were uploaded (see them all at MoMA.org/iwent) with popular tags including “inspiration,” “love,” “parents + kids,” “food + art,” and my personal favorite, “I can be an artist.”

Social media channels helped drive nearly 100,000 site views, with 15% coming directly from Facebook and 4.5% from Twitter. The project was recognized with a Webby “People’s Voice” Award for mobile and experience marketing, was written about on blogs, and became a topic for case studies in books and magazines on brand and graphic identity.