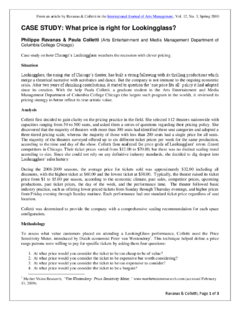 A case study on how Chicago's Lookingglass theatre weathered the recession with clever pricing.

Lookingglass, the rising star of Chicago's theatre, has built a strong following with its thrilling productions which merge a theatrical narrative with acrobatics and dance. But the company is not immune to the ongoing economic crisis. After two years of shrinking contributions, it started to question the 'one price fits all' policy it had adopted since its creation. With the help of Paula Colleti, a graduate student in the Arts Entertainment and Media Management Department of Columbia College Chicago (the largest such programme in the world), it reviewed its pricing strategy to better reflect its true artistic value.

Colleti first decided to gain clarity on the pricing practice in the field. She selected 112 theatres nationwide with capacities ranging from 50 to 500 seats, and asked them a series of questions regarding their pricing policy. She discovered that the majority of theatres with more than 300 seats had identified three seat categories and adopted a three-tiered pricing scale, whereas the majority of those with less than 200 seats had a single price for all seats. The majority of the theatres surveyed offered up to six different ticket prices per week for the same production, according to the time and day of the show. Colletti then analysed the price grids of Lookingglass' seven closest competitors in Chicago. Their ticket prices varied from $12 to $70 but there was no distinct scaling trend according to size. Since she could not rely on any definitive industry standards, she decided to dig deeper into Lookingglass' sales history.

During the 2008-2009 seasons, the average price for tickets sold was approximately $32 including all discounts, with the highest ticket at $60 and the lowest ticket at $30. Typically the theatre raised its ticket price from $1 to $5 per season, according to the economic climate, past sales, competitor prices, upcoming productions, past ticket prices, the day of the week and the performance time. The theatre followed basic industry practice, such as offering lower priced tickets from Sunday through Thursday evenings, and higher prices from Friday evening through Sunday matinee. Each performance had one standard ticket price regardless of seat location.

Colletti was determined to provide the company with a comprehensive scaling recommendation for each space configuration.