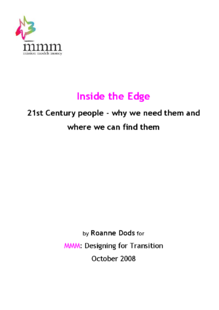 Inside the edge – the search for 21st century people

Key to the success of the arts and cultural sector's 'design for transition’ will be the people who work in, and with, its organisations. Learn more about plans to identify the 21st-century competencies that already drive success in the arts and cultural sector, and how they might be developed in people to create environments in which they and the arts can increasingly flourish.

We became very conscious of the extreme pressure put on many working in the arts and the enormous levels of passionate belief, personal commitment and sacrifice which enables the sector to flourish.

We are also more than aware that we are living in ‘powerful times’, boundless complexity, shifting sands – choose your own metaphor. Not only an age of change but a change of age. This is placing ever-increasing demands on managers in all sectors including the arts and especially on those we identify as ‘leaders’.