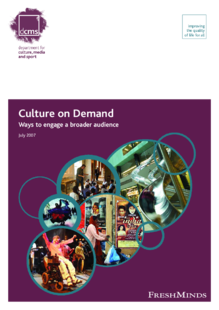 How to engage with broader audiences

Developing approaches to engage with diverse audiences, specifically disabled audiences, Black and Minority Ethnic groups and lower socio-economic groups. This study explains the motivational and functional drivers that can stimulate demand, alongside barriers to engagement and how to overcome them. A holistic organisational approach supported by a range of tactics is recommended, drawing on practical examples and case studies. These include proactive socialising, family-friendly, building partnerships and targeting investment in order to build meaningful engagement.

Strategies for engaging audiences can range from the large-scale to the very localised. An exciting example of the former, whose value is rarely recognised in the UK, is the French national music day (Fête de la Musique). This vast enterprise, which this year celebrates its 25th anniversary, involves both professional and amateur groups, covers all styles of music, and takes place in every town in France once a year. In bringing together both amateur and professional musicians, the festival provides an opportunity for young musicians to gain exposure to well-known talent. Its success is partly attributable to the social and experiential nature of the festival which brings together a diverse and impressive range of spectators as well as performers. Music is taken out of traditional venues and onto the streets as well as to more unusual locations such as museums, train stations and castles. Major music institutions (orchestras, choirs and operas) are encouraged to perform outside of their usual context.