How to develop a great iPad app 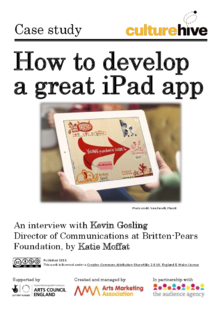 
As part of the celebrations in 2013 to mark the centenary of the birth of Benjamin Britten, one of the best known composers of the 20th Century, the Britten-Pears Foundation produced an online interactive resource and an iPad app based around one of his best known orchestral works: The Young Person’s Guide to the Orchestra. The app, aimed at 7–11 year olds, is a fun and creative way to introduce young people to the joys of the orchestra and the thrill of music-making. In this case study, Katie Moffat talks to Kevin Gosling, Director of Communications at Britten-Pears Foundation, about how this app was developed.

Explain a little bit about the functionality of the iPad app.
There are games, quizzes, an interactive score and a ‘meet the players and instruments’ section. It’s designed to be fun but informative and to help children learn what different instruments sound like and the part they individually play in the orchestra. The idea of the ‘meet the player’ videos is that if you’re considering taking up an instrument, this can help you to think about which would suit you best.