How to deliver online marketing on a shoestring 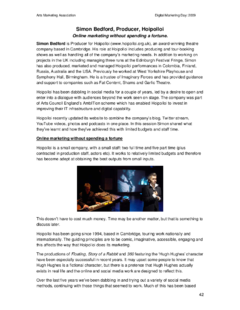 
Marketers are increasingly having to deliver campaigns with restricted budgets and fewer staff. In this case study, the author explains how their organisation recently combined their blog, YouTube videos, photos and podcasts in one place – their website. It presents a series of learning points and explains how this has been achieved with limited budgets and staff time.

How to deliver online marketing on a shoestring April 11th, 2013Sara Lock

Google Analytics is amazingly useful. As an example, we discovered a massive ‘spike’ on the blog one day when we were at the Liverpool Everyman. Further analysis showed that the contributors were mainly from Liverpool and a quick call to the theatre office at Liverpool Everyman established that they had put out a competition for press night tickets in which the answer could only be found on the blog. Following on from this, the tickets sold on that day were four times higher than the previous days – so it had a direct effect on ticket sales.