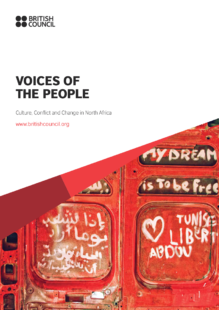 This research and article looks at possible future relationships between Britain and the Middle East and North Africa in a time of great change. It explores the potential for the UK to augment and strengthen the link between culture and social change and to participate in the flourishing of art in its multiple forms. It’s stated aim is principally to support of all artistic voices, free expression and cultural internationalism; and to offer practical expertise and contacts with established organisations to create helpful links, not only amongst artists, but between artists and producers, commissioners, editors, curators and established figures and institutions internationally.

1. The online citizen journalist emerged as a potent social actor. The use of mobile phones for photography and video enabled artists, activists and ordinary people to be seen as part of the revolutionary masses, and shifted the medium from a risky activity to an awareness-raising and documenting one. The line between documentation, democratisation, and in some cases propaganda, and art increasingly became blurred where artists, curators and communities developed deeper communication and participation in a more civil realm.

2. Cultural development is a critical and central part of the multiple, complex and long-term solutions for the people of the region. In the post-uprising environment, there has been a flowering of new culture rooted in civil society, which is widely acknowledged as a key aspect of nation-building and the underpinning of new democracies.