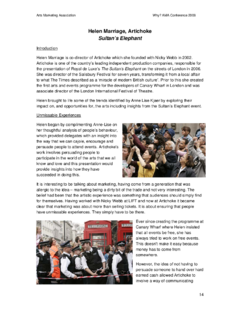 Helen Marriage uses ‘The Sultan’s Elephant’, performed on the streets of central London in 2006, to bring to life the importance of creating an unmissable experience and inspiring an emotional response in an audience. She argues that the fact that a million people came to watch the same thing provides a sense of how powerful the arts can be in transforming lives.

How ‘The Sultan’s Elephant’ shows us the power of the arts October 8th, 2013Sara Lock

It is interesting to be talking about marketing, having come from a generation that was allergic to the idea – marketing being a dirty bit of the trade and not very interesting. The belief had been that the artistic experience was something that audiences should simply find for themselves. Having worked with Nicky Webb at LIFT and now at Artichoke it became clear that marketing was about more than selling tickets. It is about ensuring that people have unmissable experiences. They simply have to be there.