How mobile can reach out to a non-traditional arts audience 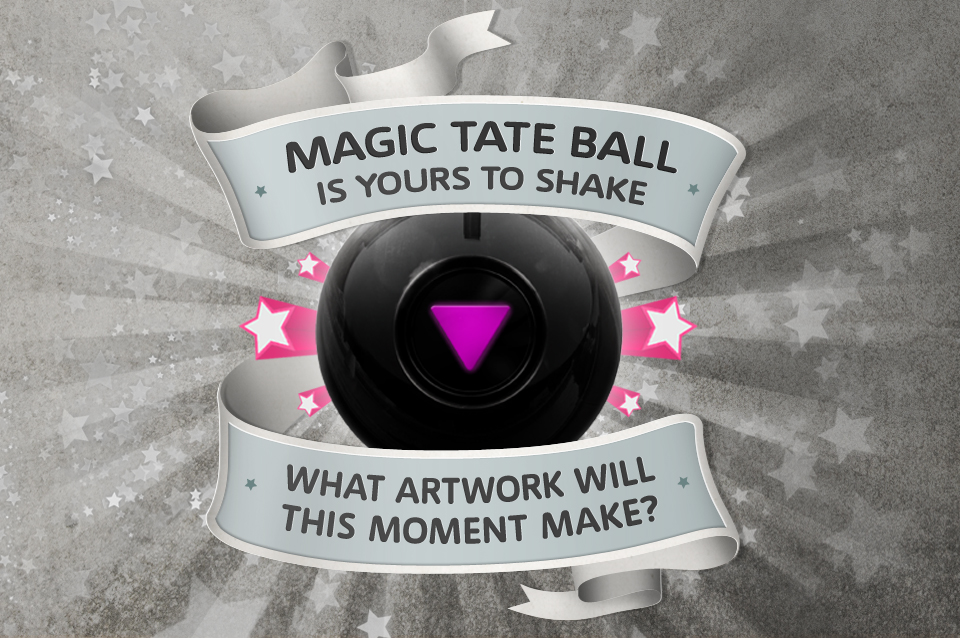 
Background
In early 2011 Thought Den were commissioned to produce a playful mobile-based experience to take Tate’s collection of artworks beyond the physical walls of the gallery.

Their previous app, Tate Trumps, was hailed as a game-changer and demonstrated public appetite for mobile experiences. Magic Tate Ball was designed to appeal to more casual mobile users on an international scale.

The target audience
It was important the mobile application appealed not just to existing fans of Tate and their collection, but to a wider audience with only a casual or passing interest in art. People who are interested in a more playful experience than cultural institutions typically offer.

Another important factor was that the eventual game should appeal beyond the stereotypical 18-35 male demographic that traditionally download and play mobile games.

The experience wasn’t intended to be a game in the conventional sense, but something that borrowed from the mechanics games employ to lower the barriers to entry to the artwork and put a smile on people’s faces.

Magic Tate Ball
‘Magic Tate Ball’ is a location-based mobile app that puts art in your pocket. Taking inspiration from the iconic Magic 8 Ball, users are invited to simply shake their phone and this clever app presents them with an artwork linked to their life at that moment. With artworks from Damien Hirst, Tracey Emin, Pablo Picasso, Henri Matisse, Claude Monet and many more, Magic Tate Ball presents a new, playful approach to discovering art. Wherever you are in the world, Magic Tate Ball will find an appropriate piece of art. On a sunny day, share in Constable’s appreciation of the great British landscape; if it’s raining you might encounter Matisse’s ‘Snail’; or in a noisy pub you might get a Georg Baselitz sculpture made with a chainsaw.

By analysing the date, time of day, GPS location, local weather data and ambient noise levels, the clever search algorithm finds a piece of artwork from Tate’s collection that is most relevant to the user’s unique surroundings. The artwork is presented with a Twitter-sized tag that offers a fun or facty explanation of its relevance.  A hidden bonus feature in the app can only be activated when the user visits Tate Modern.

Process
Our first activity was to generate three concepts; a safe and slightly traditional option, an innovative and more adventurous option and a middle ground. The Magic Tate Ball concept married elements from all three. It was forward thinking in that contextual awareness was an up and coming phenomena but a safe option because it drew on the familiar interaction and branding of the Magic Eight Ball toy.

Design followed concept and in parallel with this we liaised with Tate curators to finalise the content for the application. This involved choosing a wide spread of artworks from their collection (from both Tate Modern and Tate Britain) and then whittling this collection down based on the interesting stories we could draw out of each artwork.

Hazel Grian, a world-renowned copywriter specialising in multi-platform writing, was brought in to help generate the 2,000 or so ‘tags’ that link each artwork to the contextual feeds (time, date, weather etc.) These snippets of text played a huge role in helping each artwork resonate with that particular user in those particular surroundings. So content first, technology second.

The build occurred over three phases, from an early alpha delivery through the final delivery for submission to Apples App Store. At each development stage tweaks were made to the application and the algorithm that runs in the background to determine the most relevant piece of artwork.

Once the build for Apple’s iOS platforms was complete, we tackled a Nokia Symbian version with funds made available by Nokia. This version launched a week or two before the Apple version and has contributed approximately 40% of the combined download figures of more than 100,000.

The launch of the app was delayed by almost 6 months because Apple rejected the app on the grounds that its visual style would not be to the liking of Mattel, who developed the initial Magic Eight Ball concept. We contacted their legal department in the US and after a few months achieved their written consent.

Outcome(s)
Reviews on the App Store, Twitter, Facebook and via the press have all been glowing because the app is so simple to use. The audience really appreciate the short, fun interaction that presents them with an artwork. As an interaction it is a great way to ‘onboard’ a casual audience. Once they have been given a playful introduction to an artwork they will be much more likely to seek further details, via Tate’s site or even in person.

Magic Tate Ball has gone on to be Tate’s highest downloaded application – over 100,000 combined downloads. There are regular calls for updates from the community. The only regret is that we haven’t been able to raise a budget to implement these changes.

For Thought Den it has been a great advert of our creative thinking and execution. Working with Tate was an absolute pleasure – Louise Downe, Producer at Tate, was very involved in the concept’s development but at the same time left our team to their own devices. This flexible and trusting collaboration was very important in allowing us to adapt to challenges along the way.

Conclusions and recommendations for other arts organisations
The most fundamental lesson in app development for this audience is to keep it simple. People live busy lives and outside a dedicated gallery environment the barrier to engagement needs to be low – app developers and commissioners alike are far too easily distracted by the shiny possibilities of mobile technology.

Tate were very clear about what they wanted and who they were delivering the experience to. Their brief was incredibly concise. Thought Den were given freedom to interpret these objectives in a creative way. An ideal collaboration!

About Thought Den
Thought Den specialise in playful learning. We create games and interactive experiences that help a wide audience engage with cultural content in a fun way – follow us on Twitter.

How mobile can reach out to a non-traditional arts audience September 26th, 2013Sara Lock
| Published:2013