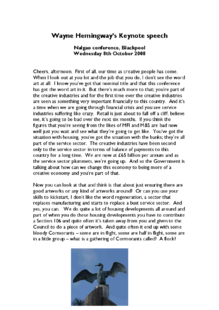 A bracing keynote speech from an artist involved in public art, the founder of Red or Dead. It focuses particularly on the quality of ne build housing and how the inclusion of artists at the heart of the planning process might improve the built environment in creative ways.

Because the ball kept going into the garden of Mrs McGregor’s garden at the back of the picture there. So I said, did she have it laid out to veg and plants? No, no I was told, she just had it laid out to concrete and she’d got one of those rotary airers. So I said what was the problem then if the ball kept going in, were they threatening her? No, they weren’t threatening her, but she felt threatened with young kids going in her garden. I said, well but that’s like terrible that you put the sign up because of that, because what you’re possibly doing is pushing these kids into doing something a lot worse for them than playing football in fact it could lead to anti-social behaviour for more people on the development.