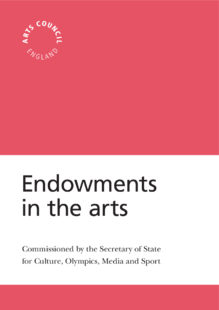 
This report reviews literature about endowments and other arts funding, to conclude that endowments are an underused tool in the English arts sector, but that they are not and can never be the whole answer. It suggests action that the Arts Council can take to support organisations at all levels of development, and the points made about fundraising and capital structure are pertinent at any stage in an organisation’s development. The report may be of use for arts organisations in considering their approach to alternative sources of funds that can complement, but not replace, public sector funding sources.

How endowments might be used to support the funding economy of the arts in Britain April 17th, 2013Sara Lock

Increased use of endowments

The scale, mission, expertise and capacity of an organisation must be considered when looking at whether it will benefit from a permanent endowment. It is generally the larger, more established arts organisations for whom this will be the case – those who already have sufficient reserves for general purposes and who have the capacity to handle the change to their capital structure. However, the analysis of endowments in use in the English arts sector in Section 4 above suggests that they are currently underused.

For organisations not yet at this stage, a strategy to address the under-capitalisation of arts organisations is required. It is widely accepted that not enough arts organisations have reserves that they, or impartial observers, consider sufficient. Too few actively seek to build up their funds; even fewer take a sophisticated approach to calculating what level of reserves would be appropriate for their organisation. This could and should sit alongside measures to promote more targeted endowments of the kind Spitalfields Music hold (see example in Section 5). The possibility that smaller organisations could benefit from community endowments and / or pooled investments should also not be ruled out. 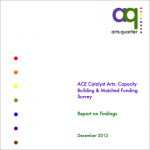