How cultural regeneration is vital for placemaking 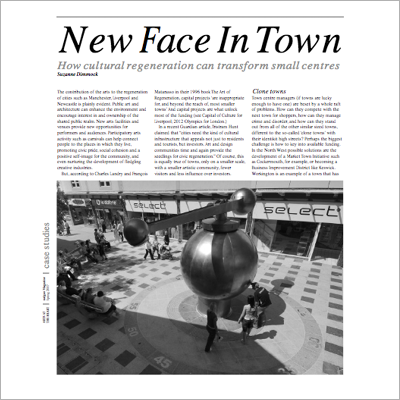 
Explore how cultural regeneration can transform small centres in this article by Suzanne Dimmock.

The contribution of the arts to the regeneration of cities such as Manchester, Liverpool and Newcastle is plainly evident. Public art and architecture can enhance the environment and encourage interest in and ownership of the shared public realm. New arts facilities and venues provide new opportunities for performers and audiences. Participatory arts activity such as carnivals can help connect people to the places in which they live, promoting civic pride, social cohesion and a positive self-image for the community, and even nurturing the development of fledgling creative industries.

But, according to Charles Landry and Francois Matarasson in their 1996 book The Art of Regeneration, capital projects 'are inappropriate for, and beyond the reach of, most smaller towns' and capital projects are what unlock most of the funding (see Capital of Culture for Liverpool, 2012 Olympics for London).

In a recent Guardian article, Tristram Hunt claimed that 'cities need the kind of cultural infrastructure that appeals not just to residents and tourists, but investors. Art and design communities time and again provide the seedlings for civic regeneration.' Of course, this is equally true of towns, only on a smaller scale, with a smaller artistic community, fewer visitors and less influence over investors.

Town centre managers (if towns are lucky enough to have one) are beset by a whole raft of problems. How can they compete with the next town for shoppers, how can they manage crime and disorder, and how can they stand out from all of the other similar sized towns, different to the so-called ‘clone towns’ with their identikit high streets?

Perhaps the biggest challenge is how to key into available funding. In the North West possible solutions are the development of a Market Town Initiative such as Cockermouth, for example, or becoming a Business Improvement District like Keswick. Workington is an example of a town that has thought long and hard about all of these challenges, and concluded that culture and the arts are a part of the solution.

Workington is a coastal town in West Cumbria, around 30 miles south of Carlisle and half an hour's drive west of the Lake District. The town has a population of 30,000 and a proud industrial heritage firmly rooted in the production and processing of coal and steel but, like many similar areas, had become a post-industrial town in economic decline.

Allerdale Borough Council has led the regeneration process, with Workington Regeneration playing a key role in the practical implementation. £2.74m was secured from the North West Regional Development Agency (NWDA) to enhance aspects of the public realm of Workington town centre, which was also being rebuilt. NWDA recognises that 'public art can contribute to the achievement of the Regional Economic Strategy objectives' including the encouragement of 'further investment, tourism and employment'.

How the arts can make a difference to community cohesion, social well being and rural regeneration