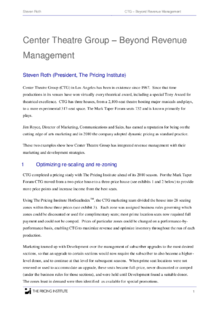 This case study shows how Centre Theatre Group in Los Angeles, with the help of The Pricing Institute, moved from a 2-price to a 3-price house and re-zoned their ticket prices, to price for new audience development. These two examples show how Center Theatre Group has integrated revenue management with their marketing and development strategies.

“The Lieutenant of Inishmore” played the Mark Taper Forum in the summer of 2010. Through surveys of preview attendees the marketing staff determined that this controversial play would generate significant word-of-mouth through the hundreds of comments, both pro and con, coming from a younger audience, and that this could significantly increase demand. To further engage this target audience, CTG published a broad cross-section of the comments on its website and through Facebook and Twitter.

Based on the social media buzz CTG put a plan in place to increase ticket prices if the show got strong reviews, which it did. Prices were increased across-the-board between $10 and $20, putting top prices at $70, and discounts that were scheduled to expire the day after opening were not renewed.