Encouraging higher levels of philanthropy in the arts 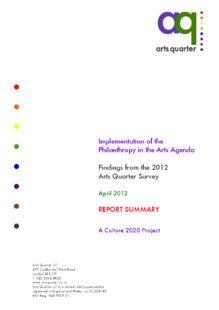 
The Philanthropy in the Arts Agenda was launched in December 2010 and advocated a wide range of aspirations and proposals for encouraging higher levels of philanthropy to arts organisations.

In 2011, arts organisations shared views on key aspects of the Agenda at that time. A year on, and Arts Quarter return to the cultural community to see how organisations feel about what has been implemented to date – what has succeeded and where further work may be needed to encourage giving to the arts from the perspective of those seeking support.

Our review of the Philanthropy in the Arts Agenda, some fifteen months after its launch and a year since our sector-wide consultation on its proposals, to again take stock of views seemed timely particularly in light of a number of the key elements of the Agenda now being in train.

The views of respondents on many of the highlights of the Agenda provides opportunity for policy makers to take stock on ever-changing perceptions of the Agenda expressed by those who will benefit from it and, we hope, respond accordingly through continuing implementation based in part on the findings as outlined in this report.

Implementation of the Philanthropy in the Arts Agenda

Of the 13 key elements of the Agenda explored within our survey, overall, our respondents feel that implementation of all but three aspects of the Agenda has been disappointingly slow to take place. Even of the three elements on which a majority of respondents felt there had been the greatest degrees of delivery – building fundraising skills (58%), promoting legacies

Across the sector as a whole, the three areas in which respondents felt there had been the least degree of delivery were in fostering and extending corporate giving (70%), promoting support from international donors (90%) and in the sharing of knowledge about endowments (76%).

The cultural sector response to the coalition’s arts philanthropy agenda