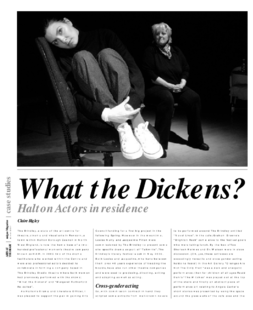 This article describes how Claire Bigley, Drama and Literature Officer, Halton Borough Council supported and worked with their drama facilitators Louise Nulty and Jacqueline Pilton of Halton Actors in Residence” (HAIR) to develop site-specific works for festivals and adapt other works including participatory works to draw in new audiences.

The play reveals what happens when Shakespeare (Louise Nulty) goes to meet the commissioning editor of Swan Television – Liz Tudor (Jacqueline Pilton). He is asked to show the film of his pilot episode of his newly crafted soap opera aptly named “Shakespeare Street”.

The film was the central element of the show and had been shot in the area local to the Brindley, with regular theatre and workshop goers from Halton Borough performing as extras. Scenes were filmed in modern dress and on location in Runcorn and Widnes and were taken from “Romeo and Juliet”, “Midsummer Nights Dream”, ”The MerryWives ofWindsor” and “Macbeth” and each represented a slice of a story as in a television ‘soap’. On 14th and 15th May 2007 the audience at the Brindley Studio Theatre watched amazed and intrigued as each of the four story lines unfolded.