Governance in the not-for-profit cultural sector 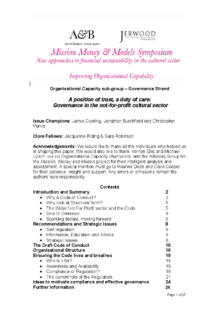 
This report looks at issues around governance in the arts. Why think about governance in the not-for-profit cultural sector? The governors of an organisation, whether they go by the name of trustees, directors or non-executive directors, are in a position of trust. They have a duty towards the organisation’s objectives and its provision of public benefit. They also have duties of care to donors, funders from the Arts Council, National Lottery to Trusts or even shareholders and the employees of a firm.

Given the time and resources available there are gaps, omissions and areas that we have not covered. Elections to boards, resignations and remuneration of trustees have not been covered. There are other areas,such as liability that we have not developed far enough. When examining organisational structure, we have confined ourselves to a review of the advantages and disadvantages of different organisational forms as we see them rather than offering examples of where current organisations would benefit from change.