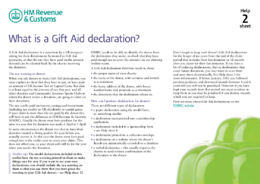 
A Gift Aid declaration is a statement by a UK taxpayer asking for their donations to be treated as Gift Aid payments, so that the tax they have paid on the amount donated can be claimed back by the charity receiving the donation. This helpful guide explains more about gift aid declaration – what it is, and how you can produce declarations for donors. It clearly outlines HMRC’s expectations of you as an organisation, as well as the donor.

The tax can be paid on income, savings and investments (including tax credits on UK dividends) or capital gains. If your claim is more than the tax paid by the donor they will have to pay the difference to HM Revenue & Customs (HMRC). Usually the donor must have paid tax for the same tax year that the donation was made, 6 April to 5 April.