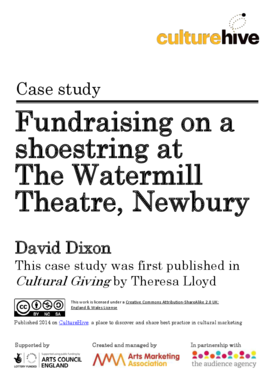 Fundraising on a shoestring at The Watermill Theatre, Newbury

The Watermill Theatre in rural Berkshire was converted in the early 1960s from a former watermill on the banks of the River Lambourn into a theatre and producing organisation. This case study by David Dixon, was first published in 2006 in Theresa Lloyd's Cultural Giving, describes how, in 2000, the theatre appointed its first professional fundraiser and by 2006 fundraising income had increased five-fold and The Watermill had also launched a £3 million capital appeal.