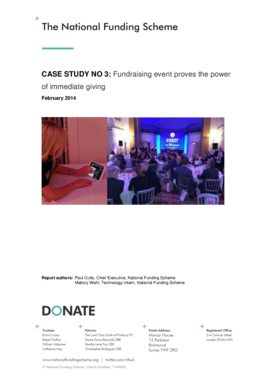 
Launched by the National Funding Scheme (NFS) in May 2013, DONATE is a dedicated mobile giving tool for the arts and heritage sector. This case study by NFS describes how a charity maximised its fundraising opportunities using digital giving during an awards dinner and auction held in central London in late 2013. It is a good example of how a mobile giving tool can be used during a fundraising event and charity auction.

We offered a £10 text channel, a QR code, dedicated web address and a live screen that would show the total being raised – and number of donations – over the course of the evening. Additionally, we designed a business card that included brief instructions on how to give via SMS, QR code and web app. Every guest found this business card at their place setting and could refer to and use it throughout the dinner. During the event, two volunteers in branded T-shirts and carrying iPads circulated to help capture donations, whilst the event MC reminded guests of the opportunity to make a donation via their own mobile devices.