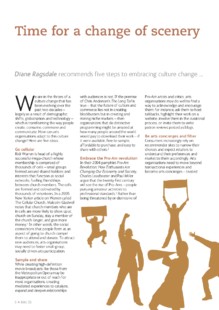 A culture change has been evolving largely as a result of demographic shifts, globalisation and technology – which is transforming the way people create, consume, commune and communicate. Diane Ragsdale finds out how arts organisations might adapt to this culture change.

Go cellular
Rick Warren is head of a highly successful mega-church whose membership is comprised of thousands of cells – small groups formed around shared hobbies and interests that function as social networks, fuelling friendships
between church members. The cells are formed and cultivated by thousands of volunteers. In a 2005 New Yorker article on Warren called The Cellular Church, Malcolm Gladwell notes that church members who are in cells are more likely to show up at church on Sunday, stay a member of the church longer, and give more money.