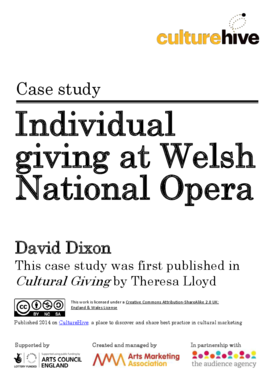 Welsh National Opera (WNO) is one of the UK’s three regional opera companies, touring Wales and central and southern England from its base in Cardiff.  In 2005 WNO moved into the new Wales Millennium Centre (WMC) in the regenerated former docklands of Cardiff Bay. This case study by David Dixon, was first published in 2006 in Theresa Lloyd's Cultural Giving, describes how WNO not only had the challenge of selling 85% more seats than their previous home but also needed to develop a consistent programme of fundraising from individuals.

The initial telephone and mail donor-recruitment process finished by January 2007 and will have generated an estimated £150,000 including Gift Aid in the first 12 months of the campaign. More importantly, WNO will have recruited around 1,000 regular donors whose monthly or quarterly gifts by direct debit will provide around £100,000 each year for WNO at little additional cost. Experience from general charities and from within the arts suggests that the average ‘lifetime’ of such regular donations is around nine years. This suggests that, even if WNO were to do nothing else with these donors, other than replace the small number who lapse, the initial investment will generate around £900,000 for WNO at a Return on Investment (ROI) of around 8:1.