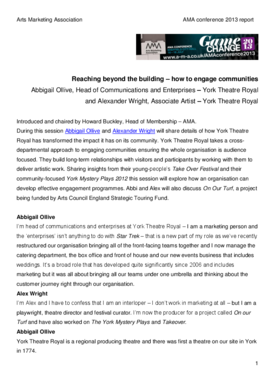 Engaging communities beyond the building

York Theatre Royal takes a cross-departmental approach to engaging communities ensuring the whole organisation is audience focused. They build long-term relationships with visitors and participants by working with them to deliver artistic work. During this AMA conference 2013 session Abbigail Ollive and Alexander Wright shared details of how York Theatre Royal has transformed the impact it has on its community.

In the summer months we traditionally, like a lot of theatres would go dark but in 2008, after two years of planning, we stage a production of The Railway Children at the National Railway Museum in York. That was our first big partnership project with another large cultural organisation in the city and it had a huge impact on the more recent history of the theatre. That production sold out, we repeated it in 2009 and then it ran at Waterloo Station, London in 2010 and 2011 before touring to Toronto, Canada. We learned a lot from that project and we realised that by doing something outside of our building, by working in a completely different way, by changing the configuration of the relationship between the audience and the action – in the museum a train came through the middle of the audience – the children and the young people who were watching the show were a lot closer to the action than they would be in our usual theatre space because there’s a big gap between the stalls and the stage and we have one of the highest stages in the country.